“Back on Track” or Out of Whack: What’s Happening with the RFS? 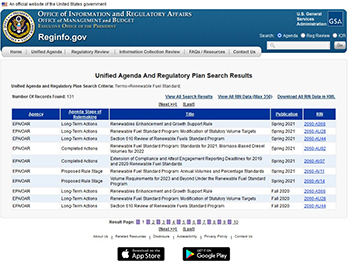 Trying to keep up with all the regulations and rulemakings governing the Renewable Fuel Standard (RFS) program is enough to make your head spin.

Add to the mix contentious debates surrounding the program’s off-again, on-again Small Refinery Exemptions (SREs) and long-delayed Renewable Volume Obligations (RVOs) for 2021 and 2022, and you might find yourself crawling upside-down across the ceiling and speaking in tongues like a young Linda Blair.

Now, on top of all that, try finding out exactly what is happening with the RFS after reports indicate that the EPA is not only looking to hold steady or decrease the RVOs for 2021, but also to retroactively lower them for 2020. At this point, you might find yourself in territory even more draconian than the world of ‘70s horror film references.

For the editorial staff of energy.ink that place is the Unified Agenda and Regulatory Plan Search Results of the Office of Management and Budget’s Office of Information and Regulatory Affairs website, Reginfo.gov. But before we get any further into the weeds, let’s backtrack a bit.

The long-overdue proposed RVOs for 2021 and 2022 were first submitted to the Office of Management and Budget (OMB) back in fall 2020. However, because they were never published in the Federal Registry, the biofuels industry was left to speculate on the contents of the proposal. This was further complicated by the SRE ruling that came down from the Supreme Court in June.

Since then, biofuel industry leaders have asked the EPA to raise the RVOs for the coming years, in keeping with the Biden administration’s campaign trail promises; while oil refiners have pushed for additional relief, in response to decreases in fuel demand resulting from the COVID-19 pandemic.

For now at least, it sounds like oil refiners might be getting some of their wishes. Sources close to the matter have told Reuters that EPA is proposing to reduce the RVOs for 2021, retroactively lower them for 2020, and issue a separate proposal to raise them for 2022. The EPA neither confirmed nor denied this in a statement issued August 26.

"The proposal aims to get the RFS program back on track while addressing challenges stemming from decisions made under the prior administration,” the statement continued. “EPA will continue to engage with all RFS stakeholders to gather input on the proposal when it is released so that the final rule can achieve the program's objectives while responding to the multiple dynamics affecting the program."

What Does that Mean?

It was an effort to find out what “back on track” means — and what, exactly, is going on here — that brought energy.ink to the OMB search results mentioned earlier in this article. There, we found a total of six RFS-related items delivered from EPA to OMB in spring 2021: two proposed rules, one completed action, and three long-term actions.

These relate not only to RVOs for the coming year, but also to the future of the program, including volume requirements for 2023 and beyond (more on that in the next section). Details remain sparse, but the fact that these filings already exist at least indicates that the EPA is cognizant of the issues at hand and working toward some sort of resolution.

The “completed action” refers to the EPA withdrawing the RVO standards for 2021 and 2022 it proposed to OMB in fall 2020. Rule 2060-AU82 states, “EPA is withdrawing this action because the agency plans to combine its efforts with new action ‘Renewable Fuel Standard Program: Annual Volumes and Percentage Standards,’ RIN 2060-AV11.” So, any reports that the prior proposal is being thrown out the window are at least somewhat accurate; EPA is starting over fresh with a new proposal.

This leads us to Proposed Rule 2060-AV11, which “establishes the annual percentage standards for cellulosic biofuel, biomass-based diesel, advanced biofuel, and total renewable fuel that apply to gasoline and diesel transportation fuel” as required under the RFS. Although the proposed RVOs are not yet public, the filing indicates that a final rule will be established by November 30, 2021 and issued sometime in December of this year.

The other proposed rule, 2060-AV14, relates to “Volume Requirements for 2023 and Beyond Under the Renewable Fuel Standard Program.” As the proposal abstract states, “The statutory provisions in the Clean Air Act governing the Renewable Fuel Standard (RFS) program provide target volumes of renewable fuel for the RFS program only through 2022. For years 2023 and thereafter, EPA must set those volumes based on an analysis of factors specified in the statute. This rulemaking will establish volume requirements beginning in 2023.”

While we don’t have any idea what the RVOs will be for 2023 and beyond, we do now know that EPA intends to issue a Notice of Proposed Rulemaking on these volume requirements in December 2021 and a final rule in December 2022. Furthermore, EPA intends to cement this timeline by statute, requiring volumes for 2023 to be established 14 months in advance, i.e., by November 30, 2021. That’s big news, and if EPA can stick to this schedule, it means the biofuel industry will for the first time in several years have the opportunity to plan for the future with some idea about what’s actually coming down the regulatory pipe.

What Else Is New?

This brings us to the three long-term actions EPA filed with OMB in spring 2021. Here we see more ambiguity, but also the possibility for positive changes that could support future growth in the biofuels space.

Rule 2060-AU44 applies to EPA’s ongoing review of revisions to the RFS that took effect in 2010, “most notably the greenhouse gas emission thresholds for renewable fuels and new limits on renewable biomass feedstock.” The review’s end date is still listed as “to be determined,” but could it be that this item has been sent to OMB because EPA is finally finishing up its work? We’ll see…

The title of Rule 2060-AU28 is sure to raise eyebrows, as it reads, “Renewable Fuel Standard Program: Modification of Statutory Volume Targets.” The rule abstract states, “Under the statutory provisions governing the Renewable Fuel Standard (RFS) program, EPA is required to modify, or ‘reset’, the applicable annual volume targets specified in the statute for future years if waivers of those volumes in past years met certain specified thresholds. Those thresholds have been met. As a result, EPA is considering proposing a rulemaking that would modify the applicable volumes targets for cellulosic biofuel, advanced biofuel, and total renewable fuel for future years.”

The appearance of the rule in the OMB docket could be a precursor to EPA revising RVOs upward, and this would jibe with what’s been reported about the separate volume requirements for 2022 (as mentioned earlier in this article). Unfortunately, there’s no other information included at this time, so this item will also have to be filed under “we’ll see,” at least for the time being.

Perhaps most promising, though, is 2060-AS66, the “Renewables Enhancement and Growth Support Rule.” The name might sound familiar to RFS trackers, as this rule was first proposed back in 2016. As a refresher, it would:

In other words, it’s a proverbial wish list for biofuel producers and other entities looking to expand their reach in the compliance market. Once again, the final rule date is still listed as “to be determined,” but the mere fact that this proposal is back in OMB’s purview can only be taken as a positive signal.

Looking ahead, if EPA and the Biden administration are seeking a way to truly “soften the blow” of stagnant or regressive RVOs, final approval of the “Renewables Enhancement and Growth Support Rule” might be just the thing.

Whether that’s wishful thinking or a reasonable outlook, energy.ink will continue to follow this story as it develops.