On May 25, Reps. Cindy Axne (D-IA) and Mike Kelly (R-PA) introduced a bill in the U.S. House of Representatives that would extend the biodiesel tax credit (BTC) for three years. 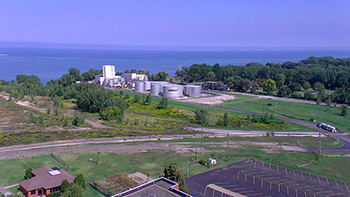 "Biodiesel is an important part of the energy sector, and an industry that is creating well-paying jobs in many rural communities throughout America including Erie, Pennsylvania,” said Rep. Mike Kelly. Shown above, the HERO BX biodiesel plant in Erie has an annual production capacity of 50 million gallons.

The BTC, which provides biofuel producers $1.00 per gallon of biodiesel or renewable diesel produced in a calendar year, is currently set to expire at the end of 2022. The tax credit has enjoyed a successful, if also shaky, history, having been extended and retroactively applied five times since it was first implemented in 2005 under the American Jobs Creation Act of 2004. It was last reinstated in December 2019 after expiring on January 1, 2018. This five-year reinstatement extended the credit retroactively through 2018 and 2019 as well as the following three years (2020-2022); hence, it is set to expire again at the end of next year.

“Biodiesel is an important part of the energy sector, and an industry that is creating well-paying jobs in many rural communities throughout America including Erie, Pennsylvania,” said Rep. Kelly, perhaps alluding to the HERO BX biodiesel plant in Erie, which has an annual production capacity of 50 million gallons. “It’s critical that we extend the biodiesel tax credit to further encourage economic growth, enhance U.S. energy security, and foster innovation that is good for our environment. I am a proud sponsor of this bill. Let’s offer the same tax incentives to the biodiesel industry that we offer to other energy producers!”

According to an estimate cited by the office of Rep. Axne, the biodiesel industry grew by 400 million gallons from 2013 to 2016, during which time the BTC remained in effect.

The National Biodiesel Board (NBB) expressed its gratitude to Sens. Grassley and Cantwell and Reps. Axne and Kelly for their support of another three-year extension to the BTC.

“As Congress looks to jumpstart economic growth, rebuild infrastructure and reduce carbon emissions, they can count on biodiesel and renewable diesel to help achieve those goals,” said Kurt Kovarik, NBB Vice President of Federal Affairs. “Biodiesel production is supporting economic opportunities and job creation in rural communities across the country. NBB’s members sincerely thank Senators Grassley and Cantwell and Representatives Axne and Kelly, along with the 27 original cosponsors.

“The biodiesel tax credit continues to be extremely successful in expanding consumer access to clean, low-carbon fuels,” Kovarik continued. “Biodiesel and renewable diesel are on average 74% less carbon intensive than petroleum diesel and have cut more than 140 million tons of carbon emissions since 2010. Moreover, these cleaner, better fuels substantially cut emissions of particulate matter that impact cancer rates, asthma and other respiratory diseases, as well as the associated healthcare costs.”

Earlier this year, on Earth Day, Senate Finance Committee Chairman Ron Wyden (D-OR) introduced the Clean Energy for America Act, which would replace the BTC with a Clean Fuel Production Credit. While the credit would be open to any renewable transportation fuel whose lifecycle emissions are 25 percent lower than the U.S. average, only zero-emission and net-negative-emission fuels would qualify for the full $1.00 per gallon credit (though the allocation formula may be amended during the legislative process). Fuels that achieve lesser emission reductions would receive smaller credits.

This credit would be in effect for 10 years, but phased out over five years once the Environmental Protection Agency and Department of Energy certify that the transportation sector has reduced its emissions by 50 percent from 2019 levels. During the phase-out period, producers would be able to claim 100 percent of the credit in the first year, 75 percent in year two, then 50 percent, 25 percent, and finally 0 percent.

Notably, Wyden’s proposal has no Republican co-sponsors while the BTC extension bills proposed in the House and Senate both enjoy bipartisan support.